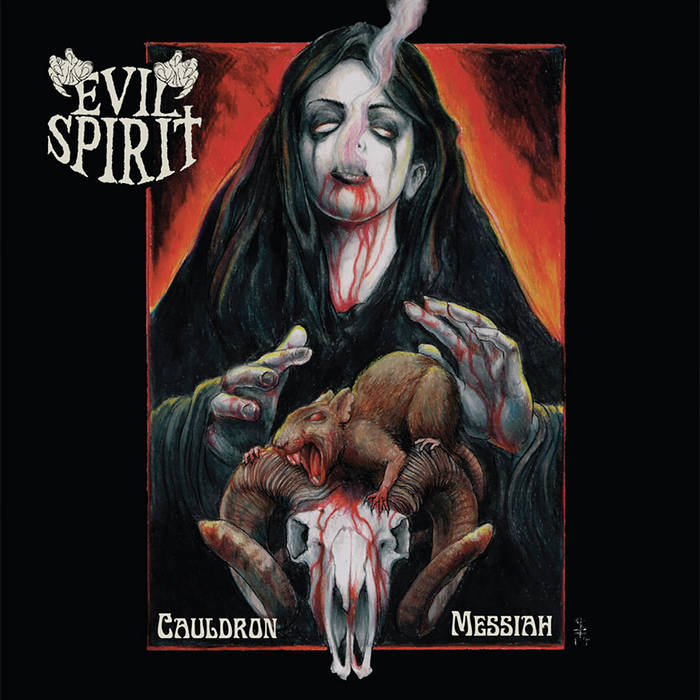 Evil Spirit first caught the world's attention (including their current label Horror Records) in 2012, with the release of their “Sempiternal Punishment” demo tape on Iron Bonehead. Despite being recorded under primitive circumstances as a duo, comprising South Americans Marcelo Aguirre on drums/vocals and Ari Almeida on guitar/bass, the demo was one of the heaviest releases in ages.The tape quickly sold out and was reissued as a 7” EP the same year, as was a second, very limited, private demo tape entitled “Phantom Der Finsternis” which showcased a 21-minute track largely based on improvisation and obfuscating atmosphere, paving the way for horrors to come. Meanwhile joined by bassist Saäth Nokr, the band entered Big Snuff Studio in Berlin to record the debut album “Cauldron Messiah” in the spring of 2014. Now, after countless hours of intense work around the visual side of the album, in order to convey an integral part of it, “Cauldron Messiah” is finally here. Beginning with an eerie intro which soon turns into a bleeding inferno, it soon becomes evident how heavy this album is going to be. With its songwriting based on gargantuan riffs that are sometimes almost frighteningly back to basics but always spot-on, the unusual structures added keep the songs from being predictable without ever losing momentum. Add to this a drumming which is both primitive and intricate (yet always adds to the songs and never gets overdone for the sheer sake of complexity), twisted and disturbing basslines, then you have the musical cornerstones of Evil Spirit. The lyrical content of Evil Spirit is as dark and disturbing as the music, and can be described as being crude, abstract and not immediately identifiable, having a nightmarish candor delivered by a vocal performance that is an histrionic croon, a deviant whisper, or a violent outburst of the bleakest rage. In fact, being influenced by the dramatic world of crime, fiction and horror cinema, the treat is a kaleidoscopic conundrum of disparate musical influences and imagery put to service of an unpleasant, subtle ride.

As it says in the lyrics of “Eve of the Beholder”:

Mastered by Patrick W. Engel at Temple of Disharmony.